It's been a long time, and so much has happened. I know a lot of you would like to know how Tony is doing and how we are all adjusting to our move across the country (again), but since I'm just getting back into the blogging world I'll leave the heavy stuff for later. I wanted to share a fun experience I had with MeKenzie today. 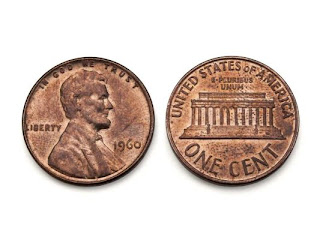 We've all heard the rhyme:
"Find a penny,
pick it up,
All the day,
You'll have good luck."

I learned this from MeKenzie today while she was walking and I was jogging beside her (that's another blog for the future). As we would come across pennies I noticed her picking some up and leaving others behind. I asked her why and she told me the Lucky Penny Tale.

It was a fun moment with my almost grown-up girl, and I thought how sweet it was to put the penny right side up for the next person to get all the luck.

So, start looking for pennies!
Take some luck and make luck for someone else.
Posted by Trina at 12:52 AM 1 comment:

I hate it when Josh gets bored:
He is such a punk:
I can't wait to see what he has in store for his roommates.
Or better yet...
What they have in store for him:

A: What do I get to do today?
M: Dance class.
A: Hooray! I will practice my pizza feet.
A, whispering: What do reindeer eat?
M: Grass
A, loudly: I bet that all the reindeer in the world are eating their favorite food right now...
GRASS!
A: I'm sorry I broke your IPod, Josh. I forgive you and I love you.
J: How will you fix it?
A, sad face: I don't know.
J: Maybe you could give me a kiss.
A, happy face: OK! 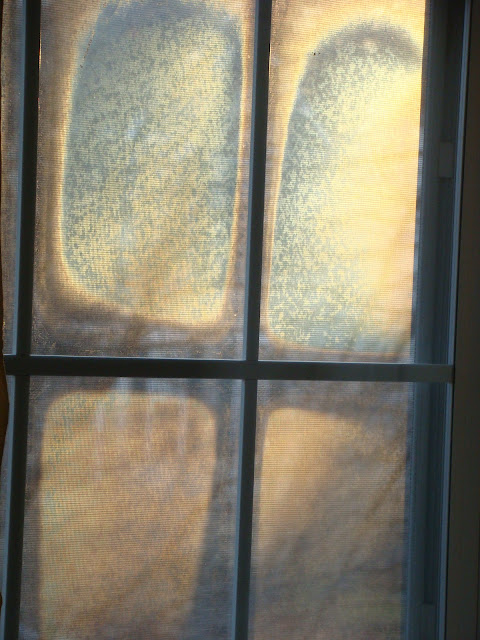 I love the blue through the screen with the yellow of the fading sun.
Posted by Trina at 5:51 PM No comments:

So, I haven't posted since Thanksgiving:
I feel like such a blog slacker:
But, I did manage to change the background for February,
(just in case I don't get to blog next month)
and thought I could write up a few things that are on my mind while I'm here:
1. Josh just finished applying for colleges. Yay!
*sniff*
2. MeKenzie is back on the basketball court. GO KENZIE!
3. I'm in Physical Therapy for my shins.
I never thought I would miss running, but I do. I really do.
4. Tony and I painted our bedroom. It's a happy yellow!
(I am secretly afraid that there is too much yellow in my house now)
5. MeKenzie is talking about being able to drive in 10 months.
Heaven help me. Another driver in training...
6. Josh quit Hollister so he could take on more hours at his other jobs -
High School, driving his Mustang, friends and life-guarding.
In that order.
7. I really want some snow...not during Spring Break, please.
8. I think that Eryn and Andrew are happily married
because I hardly ever hear from her.
(check in once in a while, my darling)
9. Alivia broke her elbow and had to wear a cast for 3 weeks.
Now whenever she falls I imagine I hear an alarmingly loud crack.
(I have actually looked around me to see if anyone else heard it too.)
10. I feel like I've frittered away these warm winter days
by not running outside.
11. The last time I ran it was the only day it really snowed.
Big, beautiful chunks of pure goodness. It was thrilling.
I haven't been running, nor has it snowed, since.
Coincidence?
We'll see next time I run.
12. Josh had all four wisdom teeth yanked right out of his precious head.
13. Tony went back to classes.
Every Monday and Thursday night...
7:00 - 10:00...
Ugh.
14. The next race I want to do is a 10k in Richmond with Josh.
Cross your fingers for me that I get the go-ahead!
15. There is a really amazing new cupcake store not too far from our house.
Future cupcake trips expected.
16. Alivia is learning how to buckle her own seat-belt.
17. We are tentatively planning a trip to Idaho in August.
No one hold their breath on this update...
Josh may go to SVU after all. Yay!
*sniff*
Posted by Trina at 7:57 PM 2 comments:

Dear Eryn and Andrew,
I feel a little sad that I did not tell you everything that happened for Thanksgiving when you called. I forget that sometimes you just want to hear all the nitty gritty of our daily lives, which can make for a very boring phone call on my part. I like to hear about what you and Andrew are doing because it's pretty much the same crazy stuff here, but as I was laying in bed tonight trying to go to sleep I realized that you didn't get to see any of the holiday wackiness...well, our kind...I'm sure you saw a whole different kind with all the family in Idaho. So this blog is just for you and Andrew:

We started off our holiday 'break' waking up at 6am! Boy, oh boy! We all ran the Turkey Trot 5k in Centerville this morning. I know...so crazy, but I really want this to start being our Thanksgiving tradition (can't wait for you to come and do it with us!!). So we headed out of the house at 6:15 so we could drop Alivia off at the Rowberry's! We ruined our tradition of sleeping in so why not ruin Lexy's too so she could babysit?

We got there early enough to walk to the start/finish line and see the masses of people! 4500 runners registered!  That was as many that registered for the 8k I ran in Richmond a few weeks ago, but this was much more difficult because we all took off at the same time and it was a shorter run, so people were weaving in and out of each others path the whole time, and little kids were all over the place just waiting to trip me O.o!

Dad hasn't had the time to put into any kind of serious training, so I was a little worried about him, but he did great! Not only did he finish, but he finished only 3 minutes behind me! Pretty impressive since I've been running since June.

Josh had us all beat by a long shot! He was like a rocket out there! He said he held himself back since this was his first race and he just wasn't sure what to expect, but that he could have done much better and wanted to run it again. I said, "Uh...no!" So we're going to look around for other 5ks that he can do. He wants to beat his time and better his pace. We may have a running rock-star on our hands.

MeKenzie did really well too. She wasn't too far behind Josh. I know it was hard for her, but she's been training for field hockey and running indoor track, so I wasn't too worried about her. And she finished with a big smile on her face as always :)

You know I've been running since June and that I have had shin splint problems, but what I didn't tell you was that a few weeks before I ran Richmond I pulled a muscle in my leg :( I haven't rested it enough since I had a 5k last Saturday (you know where Sierra lives, behind Walmart? It was down that hill and back UP that hill...pretty awful) I'm pretty sure I ripped the muscle now, so today was really hard for me. I pushed through it because I wanted to run with the family, but I won't be walking for the rest of the weekend. I have a doctors appointment on Monday, but I don't know if I can wait that long...I am in pain :(
But the thrill of the four of us running together was really awesome and I'm glad we did it.

It's the silliest looking grill, but it made the best turkey we have ever had!! Christmas came early for Dad this year :)

We got there late, so we missed the turkey hunt that Sis. Rowberry does (do you remember?). Sis. Jenson put on a little skit with her two kids, the Cherry's boys and Alivia. It was really cute:
Alivia was totally wild tonight. I mean W-I-L-D. She was taking on those bigger boys. Pushing, shoving, biting...what the heck? I don't know what got into her tonight, but she was out of control! I was so embarrassed, but luckily it's the Rowberry's and they love us (whew) or else I don't think we would ever be invited back. Dad told Alivia that we couldn't take her there anymore because she was so wild and naughty. She told him straight out, "I don't like that you said that to me because I love Rowberry's"! Little miss sassy pants. Oh! And Josh said that he has never seen the Rowberry's house look like that, ever, because the kids had things scattered all over the place, and you know the Rowberry's house! It's so beautiful and clean all the time. Josh was shocked :) Also, Alivia only ate half a roll and a whole Crunch bar that she found. Can you say sugar-high?

Josh was Mr. Happy-Go-Lucky. You know him...he was enjoying teasing me, Lexy and MeKenzie. But then he would look at me with those big brown eyes and we would just start giggling. He's such a punk!  He is getting up at 3am to hit Best Buy's Black Friday sale for a couple of games he wants, then he's off to work at Hollister at 5am until 4pm!! So, he won't be around to help with any decorating for Christmas this weekend.

Kenz was busy with Lexy - doing what girls do - texting, whispering and giggling too. I love those girls. She stayed the night there tonight, so you know she'll be of NO use to me whatsoever in decorating the house tomorrow :)

Through all this craziness I was missing you so much! My heart has been sore for weeks with just missing you. I kept trying to imagine you there with us all day doing all of these things too, and low and behold I kept picturing Andrew right behind you in my mind. I am so proud of you. I am so thankful for you and for finding the right person to help you in life. I know you are taken care of and are happy, and that makes me full of gratitude. I love you, and your cute husband.